It was just the two of us – mom and I. We left Mumbai on a Sunday afternoon in an Air Asia X flight to Kuala Lumpur and our beautiful holiday thus began.

As soon as I was outside the airport gates in KL, I picked up a local sim card and activated it for the internet. I could not imagine surviving in a new place without being able to share my experiences with my twitter friends. So that was sorted!

On the first night in Kuala Lumpur we stayed at Hilton Petaling Jaya. For some reason I was under the impression that this hotel was located somewhere close to the airport. Of course I was absolutely wrong although the hotel was pretty impressive with fancy rooms and friendly staff. We had a comfortable night sleep and next morning took a flight to our next destination – Langkawi.

The island made a remarkable impression as soon as I got out of the airport. It was green and welcoming.

We checked in Hotel Kampung Tok Senik, a beautiful resort with notably unsophisticated and enthusiastic staff. Soon after checking in we took off on our own to explore the island. We hired a taxi for 4 hours and explored placed we had read about in our research on the internet. The island was indeed amazingly green and had beautiful beaches. We ate excellent ‘Nasi Kandar’ for lunch at a mamak place called ‘Tomato’ near Cenang beach. 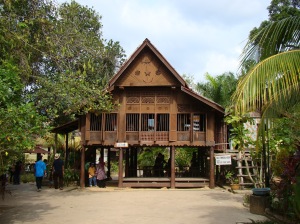 In the evening we visited an exceptionally beautiful spa ‘Alun Alun’ where mom and I spent the two most relaxing hours in this trip. If you ever go to Langkawi and fancy a spa, do not miss this place right on the Cenang beach road. The spa was followed by a simple dinner of Roti Canai. 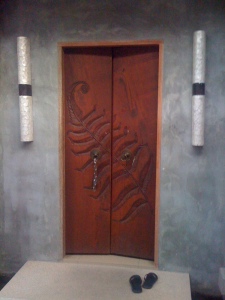 On our next day we decided to explore the island called Palau Payar – the coral island.

This was the part I was most excited about in Langkawi. Snorkeling! We reached the island in a group somewhere in mid morning. It was quite sunny but the water looked exceedingly beautiful and the snorkeling gear was inviting me to dive in. With my life jacket (as I can’t swim) I entered the water and started snorkeling. This was an experience I can’t justly describe in words. For the next 2 hours I enjoyed the corals and fish in the sea. I felt like a big truck trying to make its way through bicycles and toddlers. 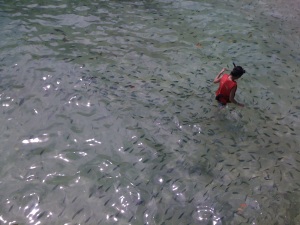 On returning to the island of Langkawi after a memorable experience we decided to continue our sightseeing at Langkawi. So we went to the Eagle Square and a park nearby. The evening was pleasant and long. We did some shopping at the jetty point. 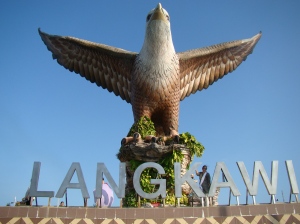 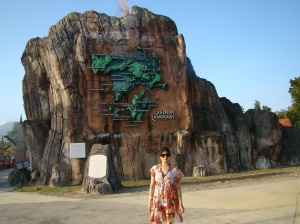 I even had a quick hair treatment after all the damage done by snorkeling. This is Berney, my sweet Chinese hair dresser. He loves “Kabhi Kabhi” and “Haathi Mere Saathi” his generation movies- according to him.

The next destination in my trip was Penang. In the morning we took a ferry from Langkawi to Kuala Kedah and then a taxi from there to Penang. We checked into our hotel – Bay View in Georgetown and decided to immediately start exploring this city of local food and some historical-cultural monuments.

We were amazed by places like ‘Line Clear’ and many other local joints recommended to me by a helpful friend who is an avid food blogger. In fact, you must check out Finelychopped’s blog too. Thanks Kalyan.

So after a scrumptious meal at Georgetown we decided to explore the city on foot. Since it was the Chinese New Year the very next day, many local shops and small cafes were closed. We visited many places such as the Pinang Peranakan Mansion, Kek Lok Si Temple, and many more. 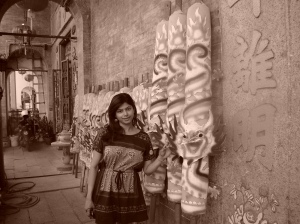 For dinner we decided to visit Batu Ferringhi, the area known for good local food and the night market. The journey to Batu Ferringhi was quite fun. We traveled in a public transport bus in the rush hour. Apart from a few Malay women trampling my foot in a fully packed bus, the journey was very enjoyable and gave us a good chance to witness a tiny part of the of the everyday life in the city.

At the night market we bought some pretty decorative stuff for our hose and a few dresses and accessories for my friends. This was followed by an absolutely priceless dinner experience in the first food court that we visited in Malaysia. The place was filled with people of all colors and nationalities. The food ranged from Italian to Thai and everything was incredibly local and real.

On our second day in Penang, we visited Fort Cornwallis, another tourist attraction located very close to my hotel.

Post that we enjoyed Chinese New Year celebrations in the hotel with Chinese lion dance. I was lucky to be in Penang during the Chinese New Year time. I got to see for real the kind of ornamentation and hype that I had only heard of from my Chinese friends who used to study with me in London. It was overwhelming and spectacular.

We spent the rest of the day shopping in Penang at ‘Komtar’ and an adjacent mall and ate at a great café-life restaurant called ‘Recipe’ in the mall. Only later we realized that ‘Recipe’ was a well known and well spread chain in Malaysia.

In the evening we thought of walking up to the Penang Bridge. This was more than an hour long walk from where we were staying. As expected, we got tired on our way and decided to hop on a random bus that seemed to be going in the correct direction. To my surprise the bus got terminated exactly 2 minutes after we had entered it. We felt like fools but still decided to walk in the direction of the bridge. My iPhone map was very helpful. Finally we reached a place from where we got a good glimpse of the bridge and decided that that was satisfactorily enough and we should return to a place where we could once again eat in a food court like atmosphere.

We started walking back and saw a narrow lane that lead into a residential area near the sea. We entered the lane and admired the colonial architecture of the area. The residents were welcoming and indifferent to us at the same time. They kept doing what they were doing without giving us a second look and also made sure they smiled back at us when we gave them any gaze that lasted longer than 2 seconds. We saw many women praying, families eating and old men drinking beer sitting on their kids’ bikes parked outside their houses. A fantastic experience! 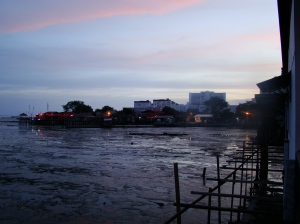 We ate dinner at a local food court in that area – just like I wanted and took a long walk back to our hotel.

Our next destination was Kuala Lumpur. On the first day we again took very long to reach the city from the airport and checked in our hotel. It was Le Meridian this time. The hotel is a tourist attraction in itself – amazingly done. Soon after, we left the hotel to explore KL.  Not surprisingly, we started this by first visiting the Twin towers.

Honestly, we were kind of let down by the enormous amount of people (tourists) who had occupied the area. However, the building was impressive! We took a few pics and moved on to out next attraction. Very soon we realized it was too sunny to walk around the city just like that. So we hired a cab for a few hours to show us the important places and tourist attractions in the city. 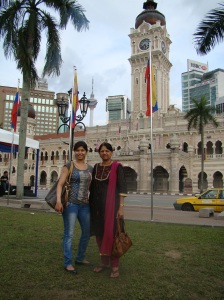 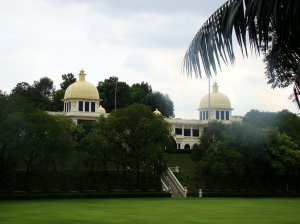 We finished our sightseeing late in the evening and went to Sungai Wang mall for some Malaysian grocery shopping – coffee, spices, curry mixes, noodles and other stuff to bring back home. This was followed by a quick dinner in the area, Durian (a local smelly yet tasty fruit) and a peaceful sleep in the hotel. 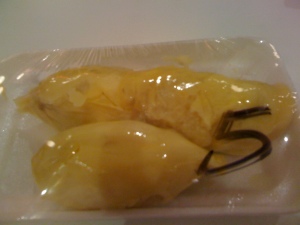 The next morning, after a lavish breakfast we visited Batu caves, a pure South Indian and Hindu attraction for Malay as well as other tourists. The caves were very impressive but required us to climb some 272 steps to reach the top.

After a tiring morning we went to the Area of Bangsar (Mid Valley mall) for some shopping. I wanted to buy iPhone 4 for myself. Sadly, KL was out of stock for my phone so we just decided to spend the day doing other shopping.

Just then we saw ‘Kenko’, a fish spa in the mall. The next few hours gave us a very different and relaxing experience. Anyone who goes to Malaysia must try a fish spa. It involves little fish biting dead skin off your feet. Truly worth the price. 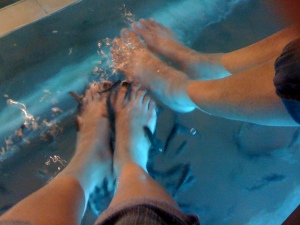 We ate lunch at Madam Kwan’s, another well known chain of restaurants in Malaysia. Obviously the food was fantastic. Again a strong recommendation made to me by Finelychopped.

We shopped some more and ate our last dinner at 2 places. One was a small Chinese joint called Wendy’s and the second one was another Chinese joint in Jalan Alor (a street filled with authentic restaurant) called ‘Dragon View’. After a satisfying dinner which comprised of a lot of things including chilly frog, we went back to our hotel, packed, had some great cocktails at the bar and were ready for our flight the next morning.

Again Air Asia X brought us back in time to Mumbai after a beautiful, relaxing and memorable holiday in Malaysia.